So it’s been a major priority on my bucket list to road trip up the west coast, and luckily I have some awesome friends who were down to be a part of this. Bethany and Mackenzie, cheers.

We decided to fly in to San Jose, CA and rent a car and have our first stop be McWay Falls in Big Sur. The drive there was already sweet because the scenery was something I’d never seen before, in fact I’d never been on the west coast except in San Diego.

I say that Big Sur was our first desirable stop, but really it was the closest In-N-Out, because let’s face it we just wanted it “Animal Style”…order your food like that and I promise you won’t be disappointed, unless you’re a health nut…but then again you probably wouldn’t be at an In-N-Out.

Anyways…we grab our refills, purchase some groceries, and head two hours south for McWay Falls. We stopped a few times along the way because who can resist these prime photo spots?? Yes, we’re actually all photographers which made it super easy and comfortable to ask whoever was driving to pull over for a couple of shots. 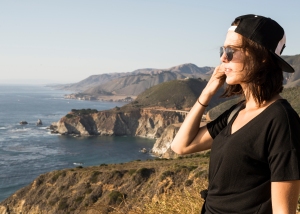 And then we arrived at McWay Falls and it was a huge game changer, in the best way possible… Just to side note, we had the best pulled pork sliders I’ve EVER had…please go to Big Sur Taphouse, just located about ten minutes north of McWay falls right off Highway 1. Their food was delicious and the atmosphere was real chill and cozy. I felt as though we stepped into a hipster’s hideaway log cabin restaurant. We stayed at Ventana Campground which was in the middle of these points. It ran for $55 a night, which is pricey for the camping world, but you’re also camping at Big Sur so it was kind of a big deal. The site was great, very spacious and spread out enough to where it didn’t feel crowded. The bathrooms, oh man! I felt like we were royalty using those babies! They were probably the nicest camping bathrooms I’ve ever used…felt a little like “glamping”, one even had a shower! I mean come on…

But over all it was a great site with super nice staff, definitely worth the extra money.